The 2021-2027 Strategic Plan, presented on 15 June 2021, provides for investments of €7.9 billion to extend our network, complete the digital transformation and put us in a leading role in the energy transition.

In an energy scenario which is firmly anchored in the EU’s 2030 and 2050 targets, the DSO (Distribution System Operators) system is called upon to play a key role in the decarbonisation of the economy. Our Strategic Plan 2021-2027 responds to these objectives, enhancing the role of gas networks as a driver of the energy transition.

Our new Strategic Plan, driven by digitalisation, aims in particular to boost the development of renewable gases such as biomethane, synthetic methane and green hydrogen, and to promote energy efficiency. We anticipate a 5.2% increase in investments compared to the previous plan, with the aim of completing the digital transformation of our assets in 2022 and making our Group a key player in the energy transition. 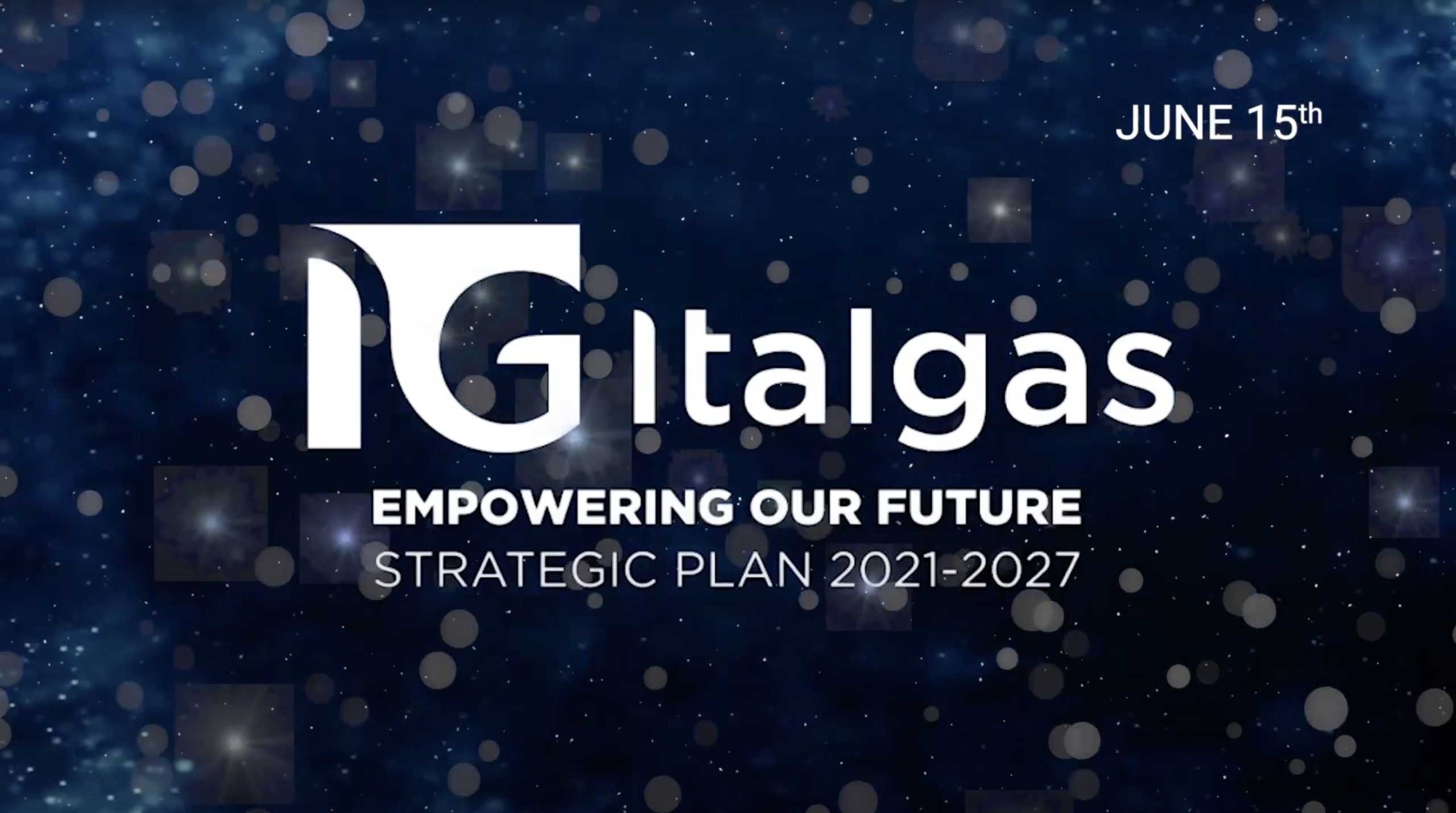 The Plan is based on five main pillars:

They will enable Italgas to play a key role in the energy transition.

Upgrading the infrastructure to accommodate and distribute renewable gas, and extending our network through M&A and tenders.

Enhancing the Group’s expertise in energy efficiency, water and IT services.

Giving a further boost to the reskilling and upskilling of our people.

A solid and efficient financial structure

To support the growth opportunities and continue to ensure adequate return for shareholders.

The Plan integrates ESG (environmental, social and governance) factors to meet sustainability challenges. To make the change effective, we set new targets in terms of emissions reduction (-30%), energy efficiency (-25% for energy consumption) and skills development.
The Strategic Plan complements and reinforces the commitments set out in our sustainability plan.

The plan provides for total investments of EUR 7.9 billion, an increase of EUR 400 million on the previous plan (+5.2%).

We intend to devote 2.2 billion to scope tenders, while the other 5.7 billion include:

Our investment programme confirms Italgas as one of Italy’s leading industrial groups in terms of its ability to plan, execute and generate value for the communities it serves, capable of providing a strong contribution for the country’s recovery.

The five main pillars of the plan 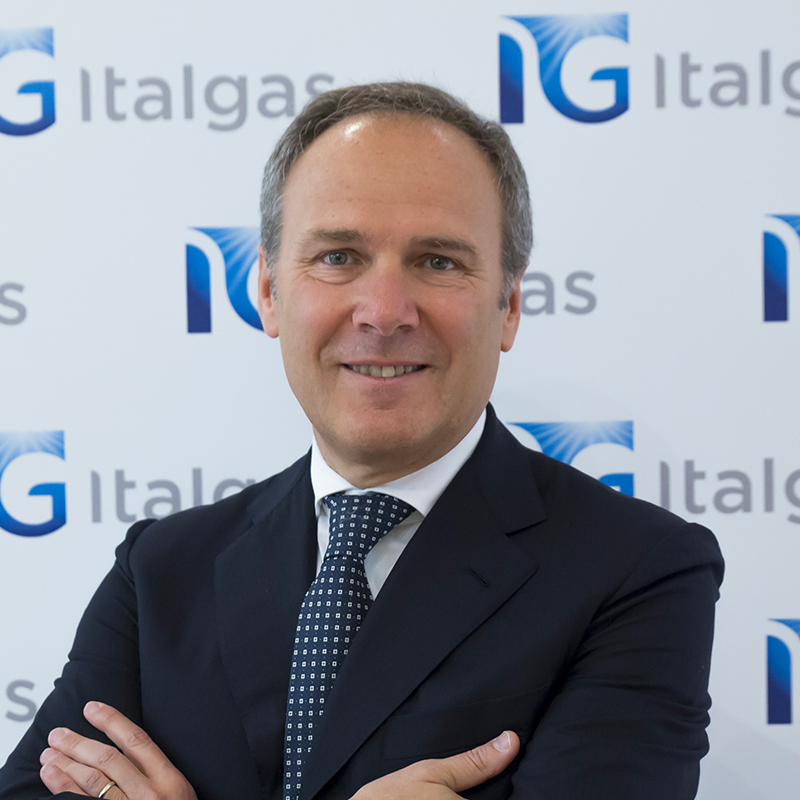 The digital transformation remains the main enabler of our growth path, with the aim of completing the digitalisation of the network in 2022 and drawing up the roadmap that will confirm the strategic role of gas networks as the driving force behind the energy transition to achieve the European net zero carbon objectives.

We will devote €1.4 billion (an increase of €300 million over the previous plan) to completing the digitisation programmes for our entire network, with the creation of smart networks capable of accommodating renewable gases such as biomethane – already widely available today and expected to develop strongly over the next decade – synthetic methane and green hydrogen.

The plan also envisages the massive installation of remote-controlled sensors and isolating valves to detect the operating parameters of the network and manage them remotely. This scenario includes:

Our capacity for innovation is reflected in the technology applied to the networks we are building in Sardinia, which are already the most modern in the country. On the island, we have met the challenge of starting to distribute methane in just over two years, and we are close to completing the construction of the 1,100 kilometres of digital native networks, suitable for accommodating a component of green hydrogen produced by our Power to Gas plant in the province of Cagliari.

We will devote about 300 million euros to Sardinia’s methanisation plan.

The largest share of investments is earmarked for the repurposing of the 73,000 km network and the further extension of our network to unreached territories, also to support the development of biomethane, expected this decade, and other renewable gases such as green hydrogen, to be received and distributed through our network.

EUR 3.1 billion is dedicated to repurposing, developing, improving and upgrading existing infrastructure, in line with the previous plan. Of this, €2.1 billion is allocated to maintenance to further improve service quality standards, reduce fugitive emissions from the network, extend the network and complete the programme to convert LPG networks to natural gas. The aim is to evolve maintenance programme from traditional to predictive, planning interventions on the basis of the analysis of operational data collected in real time from the field through the new network-integrated sensors.

Almost EUR 1 billion is earmarked for the construction of new infrastructures in the Atem areas already awarded to Italgas (Belluno, Valle d’Aosta, Turin 1 and Turin 2) and also includes EUR 140 million (+82% compared to the previous plan) for the planned acquisition of Energie Rete Gas assets in Valle D’Aosta.

Gas tenders would be an opportunity to expand our scope of activities. Planned investments amount to more than EUR 2 billion, including EUR 1.4 billion for the acquisition of third-party networks in the areas in which we will be awarded contracts, while the difference will be earmarked for investments in the maintenance, modernisation and extension of acquired networks whose operating standards will be aligned with the Group’s best practices. It is estimated that through the tendering process we could increase our market share from the current 35% to around 45% in terms of active redelivery points.

While waiting to take advantage of growth opportunities arising from tenders in the area, 380 million euros, in line with the previous plan, are allocated to external development through M&A transactions. Despite the slowdown in negotiations caused by the Covid-19 health emergency, an additional 150,000 redelivery points are expected to be acquired over the Plan period, as well as direct control of infrastructure currently managed by non-consolidated subsidiaries.

The plan also includes EUR 180 million in investments to consolidate growth in the other sectors in which we are already active, such as energy efficiency, water and services.

In line with the EU Commission’s recommendations to DSOs, we are strengthening our commitment in the energy efficiency sector, working on acquiring new expertise, including through M&A transactions. Our subsidiary Seaside is set to become an increasingly important lever in the Group’s decarbonisation and energy-saving activities and a major player in a still highly fragmented energy services market. With the incorporation of Toscana Energia Green, completed in May 2021, we further expand our scope thanks to the binding agreements for the acquisition of ESCo Ceresa SpA, a company founded in 1921 and specialised in the provision of energy services, mainly in the Turin area.

In the water sector, 120 million euros of investments are confirmed, both organic and for external growth. Part of the commitment will be allocated to the water networks currently under management, for which programmes to apply best practices and technologies developed in the field of gas distribution will continue.

As far as services are concerned, the Group will concentrate all Information Technology activities, including the Digital Factory, in a specific corporate vehicle. Since its inception, the new entity will control assets with a total value of approximately EUR 100 million and over 100 contracts worth EUR 306 million.

In the coming years, we will devote a strong focus to gender equality and training.

Recognising that the main challenges of digital transformation lie with people, we will continue to invest in upskilling and reskilling activities, providing over 600,000 hours of training. In addition, we intend to identify resources on the market to introduce additional e-skills.

Over the next few years, more than 60% of new recruits will be under 30 years of age and this will lead, through the normal generational change, to a significant lowering of the average age of employees. The Plan also envisages the insourcing of engineering and maintenance activities for digital equipment, in line with what has been done in recent years with the aim of bringing core activities back into the Group.

An Italgas Managerial Academy, which will be set up in the early years of the Plan, will ensure continuous managerial and cultural growth, conveying a single corporate purpose among the various businesses and managers.

Diversity & Inclusion is receiving increasing attention. Among the many challenges on human capital, the target on gender equality has an important place: at the end of the Plan, at least one manager out of four will be a woman.

The continuous focus on optimising the financial structure will allow us to support, thanks to the significant operating cash flow, the investment plan and the remuneration of shareholders, while also ensuring adequate financial flexibility to support development.

We will continue our efforts to optimise our financial structure in order to preserve the cost of debt, which is currently around 1%. The ratio of net debt to RAB of approximately 61.5% will be maintained throughout the Plan period at levels consistent with a solid investment grade area.

The use of sustainable sources of financing to support our energy transition investments makes the plan consistent with EU objectives.

Dividend policy reflects our commitment to providing shareholders with attractive, growing and sustainable remuneration. We confirm the four-year policy (2020-23) announced in October 2020, which provides for the distribution of a dividend equal to the greater of (i) the amount resulting from the 2019 DPS (€0.256) increased by 4% per year and (ii) the DPS equal to 65% of adjusted net income per share.